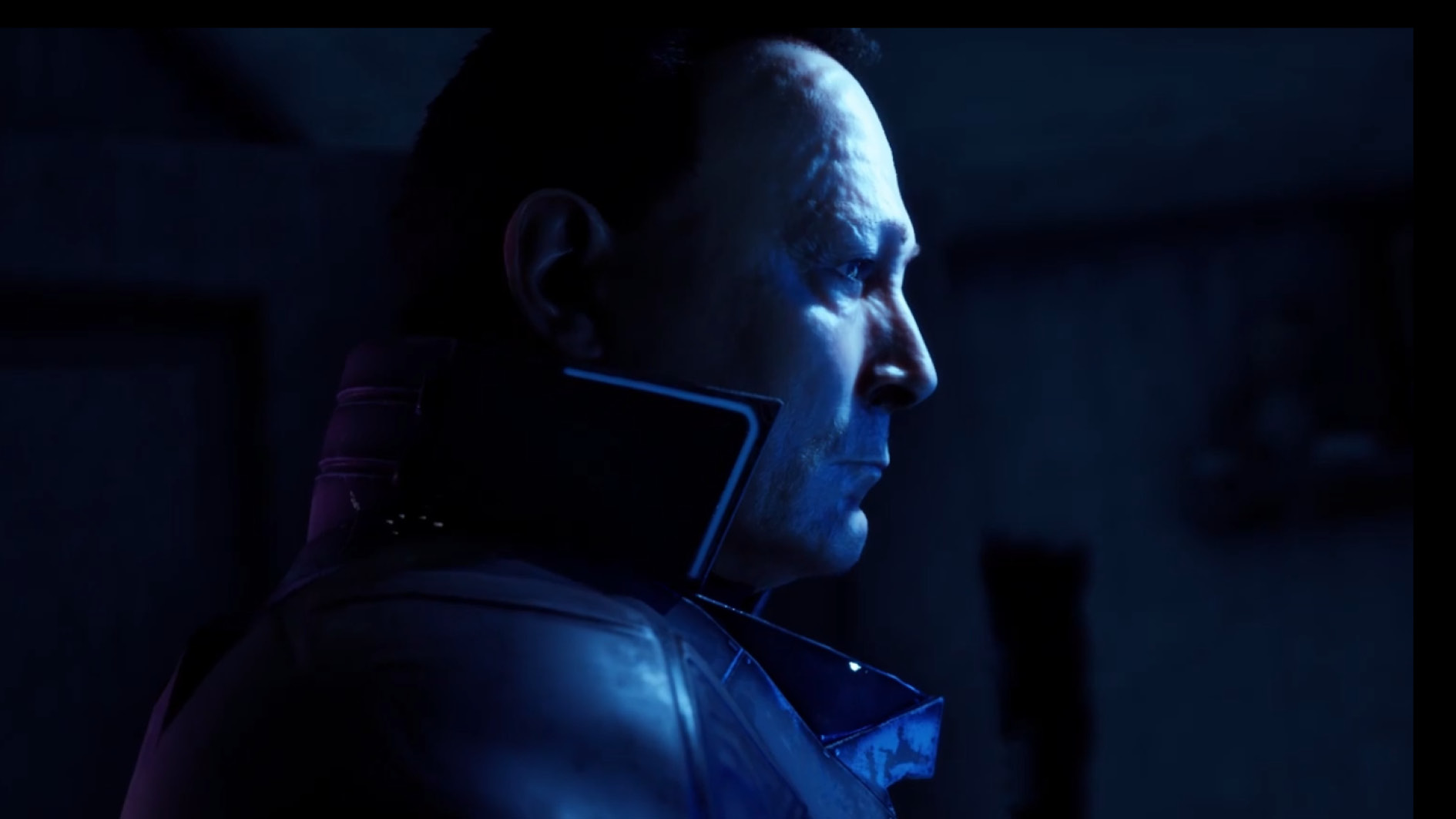 Posted at 13:06h in Nyheder, Portraits by Liv Saalbach Holse

The gaming company Eddaheim had yet to celebrate its 1st birthday before the three partners had landed their first investment. With sky-high ambitions and an original idea for a Nordic Noir computer game starring Lars Mikkelsen, they met the investors at last year’s industry event Copenhagen MatchUp and left many contacts richer – and soon after a signed investment agreement.

A year later, Mark Iversen, Alexander Tange and William Wrede Elung-Jensen have hired 25 people to develop their game Neon Knights: Humanity Erased and are working hard to become a Nordic home for storytelling.

Vision Denmark have spoken to Eddaheim about the path to private investment, about storytelling across games and films, and the value of working with other startups.

The Great Story drives the game
”We love games that get the player on the edge of the seat with excitement, but often find the stories fall a little flat. They don’t have as many dimensions as our favorite movies, series, and books, and we often find a strong story is lacking. That’s why we started developing a game with an adult narrative and with the same high level of suspense as the big action games aimed at a discerning story audience,” explains Alexander Tange, Eddaheim’s narrative director.

Alexander Tange and Mark Iversen were still students at the Danish National Film School when they founded their gaming studio together with William Wrede Elung-Jensen in the Spring of 2021. All of them were driven by the idea of a strong, meaningful narrative, and the intersection of games and cinema.

”We are very inspired by the Nordic Noir genre, which is based on the fact that there is an ugliness and some repellent elements lurking beneath the surface of the happy, harmonious welfare society. We take that to an extreme in our game Neon Knights, and examine what emerges when you scratch the surface of this – on paper – utopian sci-fi society,” Alexander Tange continues.

About Copenhagen Match Up

Copenhagen Match Up is Denmark’s biggest games industry matchmaking event. The event provides a professional meeting place, where Danish game developers, investors and publishers can exchange market insight and find each other in financial and business collaborations. The event started in 2017 and have grown year by year. Last year there were more than 350 individual meetings between 170 companies from 17 different countries.

Apart from creating an adult narrative, the goal has been to introduce key elements from film and television into their game universe – among other things by letting the story play out in the Copenhagen of the future, and having one of Denmark’s greatest actors in the role of the game’s lead character

”Lars Mikkelsen was perfect for the role of the game’s anti-hero. He He uses his whole body when working, and we swiftly realized that it was simply a waste of a great actor just to use his voice. In the United States too people have begun to bring in actors in their games, and we want to be at the forefront of this trend and development in Europe,” explains Mark Iversen, Eddaheim’s Creative Director.

The digital Avatar of Lars Mikkelsen
To bring Lars Mikkelsen into Eddaheim’s digital game universe, they have supplemented programming with real film footage, and used motion capture and 3D scanning to create a digital avatar for their main character.

”“It is a key element that Lars is recognizable as the main character in the game – both for the game experience, and to make the game stand out in the market. If we hadn’t used motion capture, we would have spent significantly more resources on animating all of Lars’ movements and facial expressions,” says William Wrede, the company’s managing director.

Motion capture technology is not new to the gaming industry and is often used by studios that produce large commercial games – the so-called AAA releases. But for smaller game studios with limited budgets, it can be difficult to prioritize the time, space, and technology it requires.

However, a raft of innovative tech startups in Copenhagen have helped make this advanced technology accessible to studios like Eddaheim.

“Technology has evolved extremely rapidly in recent years, especially in motion capture. Danish Rokoko, whose suites we use, we just have in reserve and take out when we need them. It would take an animator a week to do a simple running animation, here it takes five minutes,” adds Alexander Tange.

In addition to Rokoko, they collaborate with Rigsters, who do photogrammetry and have helped them 3D scan Lars Mikkelsen, as well as Amunet Studios, who do virtual production of both films and games. 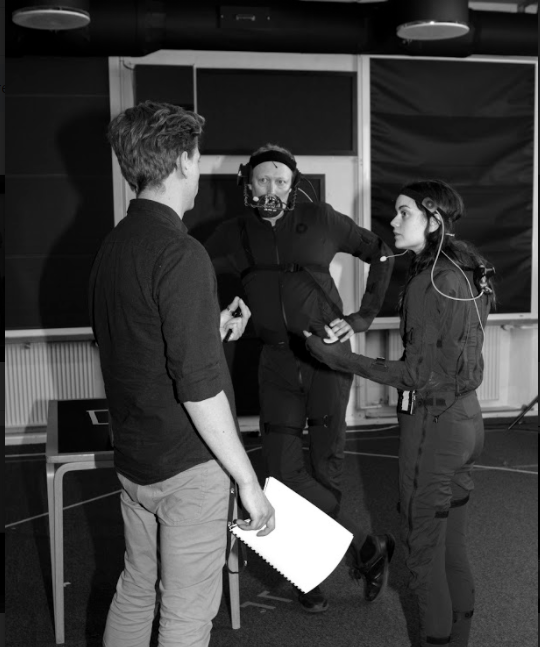 Behind the scenes at the film shoot with Lars Mikkelsen in the role as the lead character in Eddaheim’s game Neon Knights. Photo: Eddaheim.

”“Denmark is booming on the technology front, and we might as well tap into the development and the impetus, and use the cool equipment and software that exists in our network instead of doing it all ourselves. We are fortunate to have started up at a time when there are so many exciting tech companies which, like us, are interested in developing new, amazing products,” says Mark Iversen.

And Eddaheim continues to sound out the terrain for interesting new collaborators who can help them tell the good story, including outside the tech field. Because even though their first project has taken the form of a game, they don’t see themselves as a pure gaming studio.

”“We see ourselves as storytellers on all digital platforms and formats, so we are also looking at opportunities in traditional media such as TV series, comics and films. For us, it’s not about the medium and the platform, it’s about the story and choosing the best platform to tell it on,” Alexander Tange emphasizes.

The investment
The strong story and the cinematic techniques used were also the things that caught the attention of Swedish investor Karl Magnus Troedsson when he met Eddaheim last year at Copenhagen MatchUp.

”The team is very ambitious and passionate about telling amazing stories, a part of games often de-prioritized due to small budgets and other start-up limitations. The high fidelity of their cinematic benchmark and the capture of their actors’ performances really caught my eye,” explains Karl Magnus Troedsson, co-owner of the newly established investment fund Behold Ventures.

After a plethora of meetings with both publishers and investors at Copenhagen MatchUp, Eddaheim continued the dialogue with Karl Magnus Troedsson and shortly after closed an investment deal with Behold Ventures. The Swedish investor sees great potential in the young game studio’s focus on storytelling.

”The industry is looking for new kinds of ventures that focus on bringing the production- and story quality of film into games, and I believe that the team at Eddaheim can do just that. How they use digital actors and traditional film techniques to tell stories in games is very promising,” says Karl Magnus Troedsson.

With Behold Ventures’ investment, Eddaheim has been able to continue their development of the game Neon Knights: Humanity Erased. They are now on the cusp of a vertical slice – a small sample of the game to demonstrate its full potential – to be showcased when they return to Copenhagen MatchUp on April 25. This time it’s about getting their game out into the world.

”Now we need to find a publisher for Neon Knights. Of course, we are also always looking for investors who can help develop and grow Eddaheim into the Nordic home for storytelling we dream of becoming. But in the first instance, it’s about getting our first game out into the world,” says William Wrede in conclusion.

Copenhagen MatchUp is held in Copenhagen on 25. – 26. April and consists of both physical and online 1:1 matchmaking. Read more about the event and the full program here:

Autumn 2020: A cinematic benchmark of Neon Knights is released as a graduation project from the Danish National Film School.
December 2020: Eddaheim is founded and a playable prototype is developed with support from the Danish Film Institute.
April 2021: Eddaheim participates in Copenhagen MatchUp and meets Karl Magnus Troedsson from Behold Ventures, who invests in the company.
January 2022: Eddaheim receives an Epic MegaGrant to further develop their cinematic production method in Unreal Engine.
March 2022: Eddaheim completes a vertical slice with the help of Behold Ventures, and looks for publishers for the completed game.