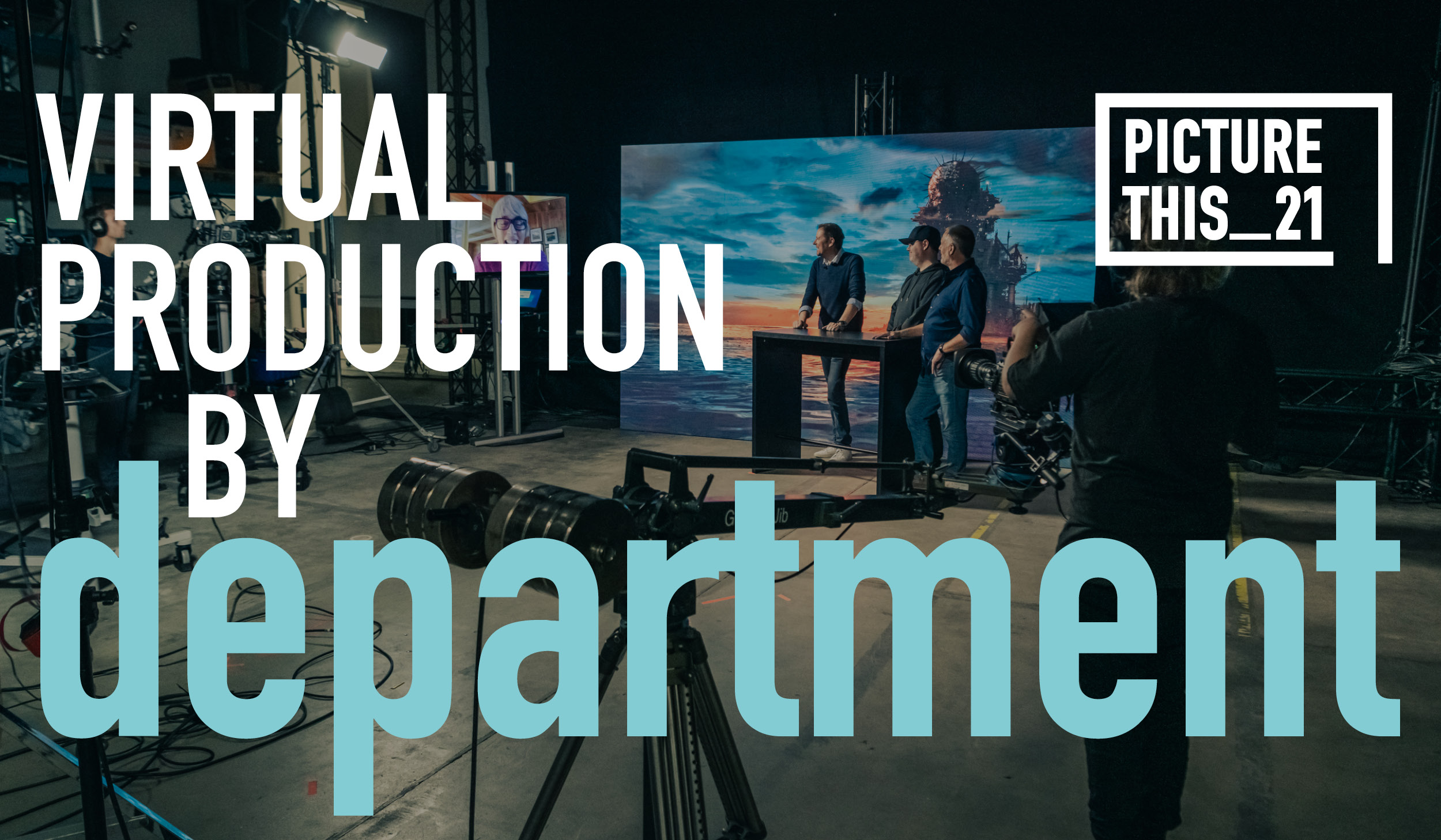 Posted at 14:36h in Nyheder, Nyheder by Liv Saalbach Holse
PICTURE THIS_ IS BACK! This year we dig deeper into how virtual production affects the film industry’s key departments and how real-time technology impacts their workflow. We call it ‘virtual production by department’. Join us on October 5th when we gather the industry LIVE ON-SITE at the National Film School of Denmark for a day of networking, knowledge, and best practices with brilliant digital pioneers from Denmark and abroad.

We have invited a cross-section of inspiring creative professionals from different parts of the pipeline and in different positions including show creators, producers, directors, production designers, cinematographers, and more to share their first-hand experiences with integrating virtual production into their workflow.

Each one will present how real-time technology and virtual production methods influence their work and methods – both practically and artistically, and how it impacts the collaboration across creative departments.

“Virtual production is no longer reserved for big Hollywood Studios. We see virtual studios emerge all over Europe, and in a few years, it is expected to be one of the common ways of producing films, also in Denmark. The new methods introduce a wide range of creative possibilities but will also result in higher demand for new technical skills and an understanding of changing workflows. “The goal of PICTURE THIS_21 is to inspire and prepare the Danish industry for the future of film production. It is essential that we stay ahead when it comes to adapting real-time technology and virtual production, and that we gain a deeper understanding of what kind of production tasks benefit most from these new technologies.says Allan Mathson Hansen, CEO of Nordisk Film on behalf of Nordisk Film Fonden, who has initiated the conference.

Meet realtime film maker ‘HaZ’ Dulull
PICTURE THIS_21 brings you the cutting edge of digital production through state-of-the-art case studies and work-in-progress from Denmark and abroad.

We are proud to present our first speaker UK-based director and producer Hasraf ‘HaZ’ Dulull. HaZ started his career in visual effects for TV and films like Christopher Nolan’s THE DARK KNIGHT, before transitioning to directing and producing with his breakout sci-fi indie feature film THE BEYOND followed by 2036: ORIGIN UNKNOWN. HaZ then pivoted towards real-time animated feature films and TV to stay relevant and proactive in Hollywood.

This ultimately helped prepare him to combine live-action with real-time CG for the virtual production shoot on the short film project PERCIVAL, created by Rebellion Film Studios. PERCIVAL is believed to be the world’s first ‘all virtual’ production, with all the action playing out entirely in front of a halo of large LED screen displays.

At PICTURE THIS_21 HaZ will share how indie filmmakers can harness game engines to tell high-concept stories which were not possible to achieve previously without huge budgets and resources. His presentation will also be a deep dive into the creative, technical, and business decisions he made on those projects. Learn more about his session ‘My journey into real-time filmmaking with virtual production’ here:

Stay tuned for more program and speaker announcements in the coming weeks at picturethisconference.com, Facebook: Picture This – Film Tech Conference and Twitter @picturethis_21.

PICTURE THIS_ is initiated and funded by Nordisk Film Fonden and organized by Vision Denmark in collaboration with The Nation Film School of Denmark, Filmworkshop Copenhagen and Aalborg University – Copenhagen. The conference is supported by the association of Danish Film Directors, Danish Designers for Stage and Screen, PRD – Producers Rights Denmark, Creative Europe MEDIA Desk in Denmark and Creative Europe MEDIA Desk Berlin-Brandenburg.

The standard ticket price is 250 DKK.

In collaboration with Danish Film Directors and Danish Designers for Stage and Screen we offer all members of the associations a 50% discount on their ticket for PICTURE THIS_21.

Read more and get your ticket here: