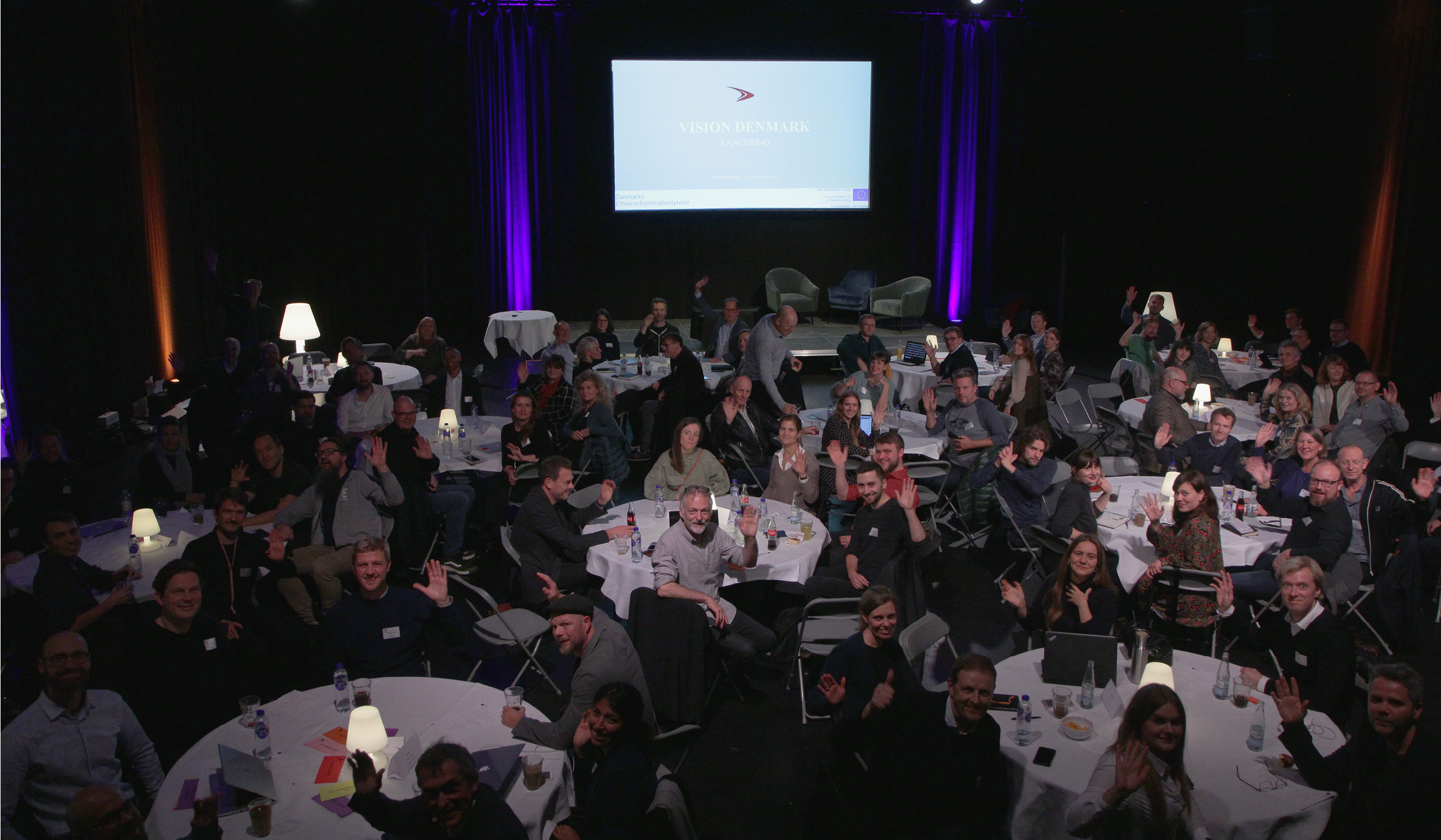 Posted at 12:43h in Uncategorized by Liv Saalbach Holse

In addition to a large number of speakers, more than 100 representatives from Danish companies and organizations in games, film, television, animation and XR participated in the launch of Vision Denmark in Nordisk Films Studio 3. Between presentations from Liberal Party business spokesman Tommy Ahlers and SYBO Games director Mathias Gredal Nørvig, participants were invited to contribute their views on what Vision Denmark can give them and the potential benefits of uniting in a business alliance.

During the course of two constructive workshops, one common denominator could be identified across industries; all are producers or suppliers of strong Danish stories and experiences and make use of the same skillsets.

Skillsets – a major challenge
The need for skillsets emerged as one of the major challenges in the industry. Companies in the industry are currently experiencing strong demand for digital visual storytelling and experiences – a demand that can only be met if companies have access to more new talent, and the ability to upgrade the qualifications of the workforce through more opportunities for ongoing training. Against this background, industry actors called for mapping of existing training channels as well as recruitment routes to industry, followed by concrete efforts and initiatives.

In addition, a new recruitment platform, an internship scheme and access to business development were proposed, – for example through incubation processes and accelerator procedures.

Risk capital and international branding
Another essential need that also came to the forefront during the two workshops was a continued – and increased – access to capital from national production discounts attracting international capital, and seed money for growth. The participants on the day were also keen to bring about a greater sense of common purpose and increased political attention across the entire industry, a focus on sustainability, and a stronger international branding of Danish content production.

Breaking down the Silo Mentality
Despite their similarities, differences exist between the various industries. The participants therefore proposed joint networks across “silos”, allowing industry parties to develop world building and IP development across movies, television, games and XR, as well as the exchange of business models that can strengthen the industry in general and create better synergies.

Innovation of technology and methodology
Finally, access to technology and the ability to experiment with new methods, e.g. through virtual production labs, was considered an essential factor in increasing innovation within companies in the industry. Similarly, there was a desire to develop more projects in cooperation with other industries.

Vision Denmark gets down to business
We at Vision Denmark are delighted by the great desire for involvement we are already experiencing from across the industries. It is exciting to see that across industries and differences there also exists a great commonality of interest in terms of both self-awareness, and of business challenges. The above proposals and wishes will be central to our position when the Vision Denmark Secretariat now gets down to business and defines and sets in motion the activities the alliance will take on over the coming year.

The key messages from launch day can also be seen in the video below, where eight participants give their views on Vision Denmark and the potential to work together in a creative alliance focused on the commercial exploitation of our stories and interactive products.